Showing posts from July, 2008
Show all

Websites that I visit

(I hope this will be beneficial for you) NT Wright http://www.ntwrightpage.com/ A favorite of the North Delhi Evangelical Graduates Fellowship. Contains free downloadable audio lectures and articles. If you have a mobile phone with good memory- great! Specialty: Paul, Jesus (especially the resurrection and the Kingdom of God) ‘world famous’ NT Wright, Bishop of Durham, New Testament Scholar. Veritas forum http://www.veritas.org/ University events that engage students and faculty in discussions about life's hardest questions and the relevance of Jesus Christ to all of life. Free audio lectures. Look for Os Guinness, Vinoth Ramachandra and others Trinity forum http://www.ttf.org/ Contributing to the transformation and renewal of society through the transformation and renewal of leaders Article, ‘The paradox of the pursuit of happiness’ and others. Os Guinness is a senior fellow here. Cambridge papers http://www.jubilee-centre.org/resources.php?catID=1 High quality
1 comment
Read more

July 21, 2008
(Praise and Worship, 20/07/2008 DBF North I led the praise and worship yesterday and this was how it went) May our worship be acceptable to you, Our Rock and our Redeemer. Amen Good morning, it’s nice to see all of you. We will be learning about worship and also do so as we worship God this morning. [A follow-up of last Sunday’s worship when I said, “Honestly, I’m annoyed at the way we do worship because we have become addicted to music, and the feelings and the experience that we have missed the meaning of worship in the wider context of our everyday life and refused to commit ourselves to any serious study of the Bible] Worship is a natural response when we come to know who God is and what He does. If such is not our response, we do not really know him because we cannot adore or worship someone we do not really know. Worship is not about us (not a favor we do to God) I’m coming to the heart of worship And it’s all about you Heart of Worship Open the eyes of my Heart Wha
1 comment
Read more

Katie Melua and appreciation of music 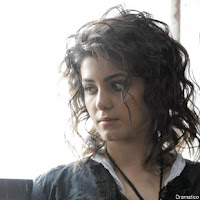 I first came across her songs on TV. It was in a Nobel Peace Prize concert or something. She sang two songs of which one was 'I cried for you'. I can't remember the other. I didn't get her surname, so I searched in google and got it. I did not know how to listen to songs online; I think it was in 2004 when I was in final year MBBS. So, I started searching for her cassettes/CDs in the music stores in Imphal. I also searched in Kohima and Delhi, but to my surprise, I have never seen any of her cassette/CD yet. No friend that I asked had heard of her. On day while playing in my friend Samuel's computer, to my horor, he has the the album 'piece by piece' in his music file. "Hey, you know Katie Melua? how did you find her songs? I have been searching in the music stores for years!" He was also shocked. To him, I was the only friend who knows Katie Melua. He said he got the songs in his hostel in IIT Delhi. Katie Melua was born in Georgia in the for
Post a Comment
Read more
More posts

Sao Tunyi
I am an Epidemiologist working at the Directorate of Health and Family Welfare, Kohima, Nagaland, India... Thank you for visiting